On August 23, 1930 the Ottawa Journal carried a fascinating story about how Monarch Airways of Ottawa had delivered their first glider to their flying field in Britannia “…where experienced instructors are available for the teaching of this art of flying.”1

Yup, that what it says, and the glider was delivered to one “Arnold Sparrow of Britannia.” The article mentions that Monarch Airways also offers courses in motors, drafting, and aircraft construction.

So was there an airfield in Britannia, if so, where was it, how did we not know about it, and what was “Monarch Airways?”

Starting in July of 1928 and running for about 2 yrs “Monarch Airways” of Ottawa, associated with the “Detroit Motor and Aircraft School” (zero hits on that internet search), offered a course in aircraft rigging for $25 (about $350 in 2018 dollars).

In Oct of 1928 they announced the sale of public shares to raise investment capital. The plan was to build a glider manufacturing plant and airfield somewhere in or near Ottawa because ‘aviation is here to stay.’ Their target was to raise $100,000, about $1.5 million in 2018 dollars. 2

Their address is given as 426 Gladstone Ave (just west of Kent), the ‘Detroit Motor Building’; hence “The Detroit Motor and Aircraft School”, apparently with no connection to the city in Michigan, USA. The article also lists the principle officers, including one John A. Ferns as Director and General Manager.

The officers and company seem perfectly legit, and Ferns had been an auctioneer3  specializing in repossessed cars 4 hence “Detroit Motors.”

An article in Jan of 1929 article says that Monarch has a staff of seven at the Gladstone address with plans for an assembly plant at Ridgemont south of Ottawa. The article speaks in glowing terms of the lightweight aircraft which rely on human power to stay aloft (obviously the reporter was not clear on the concept of gliders).

In 1973 someone wrote to the Ottawa Journal Finances Editor asking about Monarch Airways. His father-in-law had once been given 100 shares of Monarch Airways and the person wondered if they were worth anything. The editor replied, saying in effect that, while Monarch may have once existed as far as he knew no one had ever heard of them.6

Monarch Airways was a visionary enterprise to sell a high end luxury good, and it started just before the Great Depression began. There is no way to know if they might have succeeded otherwise, but as Canada’s national income dropped 40% they probably didn’t have a prayer. 7

Was there ever a “flying field” in Britannia, with or without instructors?

More than a few things have been reported as already existing (eg Britanniaville, Squirrels and Yohawks) when they never did. In all likelihood the airfield was planned, but never actually got made.

Not that airfields in 1930 amounted to much (see below), but you needed land that you had permission and access to. Even by 1930 standards it was an ambitious idea for a firm that was on the verge of ceasing to exist.

It probably wasn’t in Britannia

A hundred years ago many things were described as “in Britannia” even though they weren’t, simply because Britannia was the closest well known reference point.

This has included things like Hahn’s Nursery out at Crystal Beach, and Charlie’s Motel which was on the other side of Bell’s Corners. Part of the confusion stemmed from the fact that the early Britannia Post Office and Britannia Heights Post Office districts extended considerably to the west. 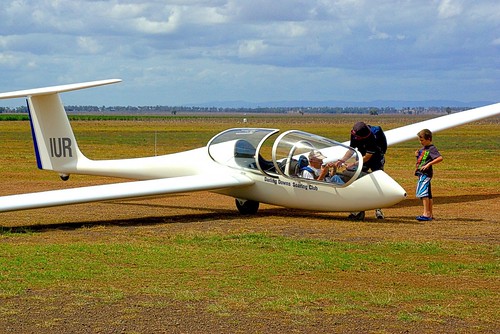 Of course there could have been two Arnold Sparrows, or he could have lived in Britannia and been the rectors warden in Bells Corners, but the most likely explanation is that he was from the Bells Corners area, and that first story just named him as being “of Britannia” ie somewhere between Ottawa and Arnprior.

In fact newspaper stories from 1939 and later mention an Arnold Sparrow of Kinburn, even further west.9 Of course he could have moved, or he could always have been on the other side of Bells Corners nearer Kinburn, but is only referred to as such once Kinburn got big enough to be recognized as somewhere.

It probably wasn’t an airfield

Realize that in 1930 a flying field was any reasonably level and firm pasture that had a wind sock. What made it a flying field versus a pasture was how often it had planes vs cows or sheep on it,

Even today that’s what many small airfields amount to, firm, leveled grass fields and not much else. No doubt the glider delivered to Arnold Sparrow was going to one such pasture, and this was de facto the new airfield for Monarch Airways.

If any plane ever landed or took off from what we now consider to be Britannia in 1930, it would probably have been on one of Robert Magee’s fields or farm tracks rather than anything that had been created explicitly as an airfield. That’s a big if, because there is no hint in the record that any such thing ever happened.

To summarize, the “flying field” probably never existed. If it did, it probably wasn’t in Britannia. If it was, it wasn’t anything more than farm pasture that no plane ever actually landed on or took off from.

Posted in History, Mice and Men, UncategorizedLeave a comment