What would be the Lindenhof Restaurant began as a Chicken Delight in 1968 at 965 Richmond Rd; the site currently occupied by a Honda Dealership about 100 m west of Woodroffe Ave 1.

Over the next 10 years the eatery morphed, first by opening a small German dining lounge called the Lindenhof behind the Chicken Delight in 1975 1.

By the summer of 1976 the Lindenhof offered a combined menu2 and the Chicken Delight is being refered to in the past tense.3

In the Nov of 1977 the Lindenhof is described as being “once home of the Chicken Delight.4 That Christmas the annual Holiday Greetings in the newspapers include the last mention of Chicken Delight.5

In 19786 and 19807 two newspaper stories describe difficulties the Lindenhof is having getting zoning permits to expand the business. 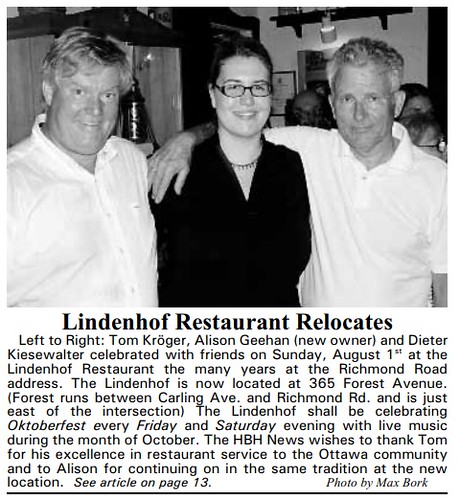 One odd element of the story is that in both articles the owner is described as one Dieter Kiesewalter. That is certainly consistent with the 1967 advertisements for hiring staff which tells people that they will be interviewed by Dieter Kiesewalter8.

What’s peculiar about that is that a history of the Lindenhof published in The Hofbräuhaus News in 2004 makes absolutely no mention of Kiesewalter, none at all. The ownership and credit for the Lindenhof is ascribed to Ilse Kroeger, and later her son Thomas.

The article is written by … Dieter Kiesewalter.1

The clue is perhaps that the article describes the Kroeger’s as operators of the Chicken Delight since 1972.

It sounds like in 1967 Kiesewalter was the original owner and operator of the soon to open Chicken Delight.

Then with the arrival/hiring of the Kroegers  in 1972 he stepped back and they took a more and more active role, particularly in creating the Lindenhof.

As such, while Kiesewalter may still have been the owner, the real credit for the Lindenhof belonged to the Kroeger’s. For that reason he would have kept his own name out of the article about the Lindenhof.

By 1999 (ie 20 yrs later) Thomas Kroeger is described as the owner9, although how recent that was is unknown.

In 2004 the decision is made to sell the business1, and I am guessing the building and property as well. Alison Geehan wants to keep the Lindenhof going, but I suppose did not have the capital to buy the property. So instead she buys the business and moves it to 365 Forest St.

Most of the staff move with the restaurant, including chef Peter Adelberg and “host” (and former owner) Thomas Kroeger1.

Whatever the interior may have been like, the new location is actually a terrible spot.

Not because it is in Britannia Heights, but because 365 Forest is centre of our only mini-industrial park.

With Apple Auto-Glass on one side and parking lots on every other side, it is asphalt as far the eye could see. Beyond that, Richmond Rd to the north and Carling to the south.

Not exactly the most appealing vistas when out having a drink and dinner in the Biergarten. Even if eating inside, it’s still a grim looking location to drive or walk to, particularly in the evening.

The reviews had been consistently good since the 1970s and would continue to be10, 11, 12.  Even so, I presume that it was a struggle, because in July of 2009 the restaurant relocates to Preston St 13.

Unfortunately it looks like it was too little, too late. In Aug of 2012 the Lindenhof closes it’s doors for the last time14.

Coincidently, the Chicken Delight franchise on Bank St hsd moved to Industrial Ave and there morphed into “Chicken Boy” and the Gasthaus Zum Dorf-Krug, which closed in 2004. 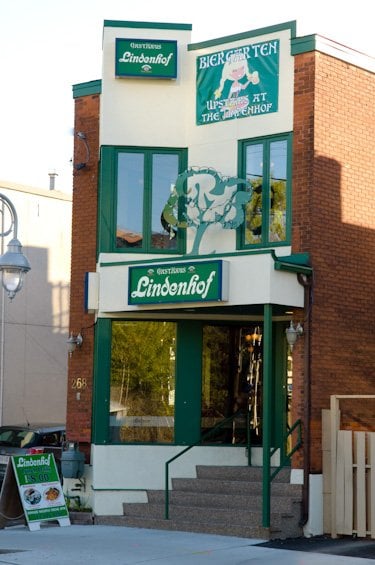