In 1970 the National Capital Commission announced plans for an extensive network of bike paths for the Ottawa region.1 In the spring of 1971 the surprise was that some of the paths were ready for use, weather permitting 2

Shortly thereafter the plans for the full 80 km of paths were released, incuding the River Parkway path 3

In Britannia the path ran straight down the old CPR right of way from the River Parkway in the east to Carling Ave in the west. For Britannia this meant convenient acces to both the river front and all of neighbourhoods right down to downtown. For civil servant bike commuters, a direct, traffic free route to Tunny’s Pasture or the city centre was a God send.

The Paths proved extremely popular to both recreational cyclists and pedestrians, unfortunately leading to conflicts and accidents. Would that it were limited to them, but the new paths were poorly policed and occasionally motorcycles and cars would use them as a convenient shortcut 4

The following year someone took matters into their own hands and the “Tack Dropper” became a notorious vigilante who never was caught.5 In 1973 the NCC instituted bike patrols to keep bikes of the pedestrian sections of the network, to little effect 6

Over the years they threatened tickets and even an RCMP crackdown on cyclists, but the problems continued, at least for a while. 7,8

In 1994 more conflict arose when installing storm sewers led to the creation of a “temporary’ foot path, that at least seemed to being turned into a permanent, 3 m wide major pathway. Some 20 residents undertook a spontaneous act of civil disobedience and stopped the paving. 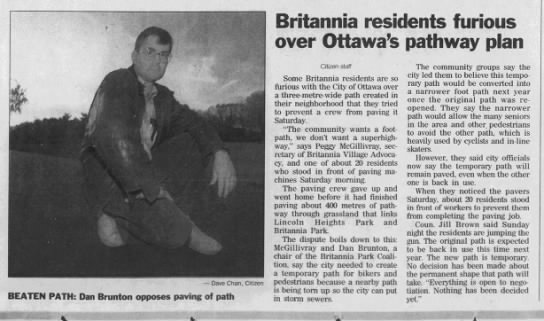 Now years later the conflicts seem to have largely sorted themselves out, although in Britannia the intersection of Britannia and the path is just a serious accident just waiting to happen. The majority of the cyclists hardly slow down for the intersection, never mind actually look for traffic, and it is just a matter of time before that intersection claims another fatality.

Other than that, the path is a fantastic addition to the neighbourhood, providing healthy transportation access to work, shopping, and recreation.