Growing up in Britannia in the 1960s and 70s there was a certain accepted wisdom that Britannia and/or the west end was a relatively “tough” neighbourhood. The noteriety was based particularly on the reputation of two fearsome gangs, the Squirrels and the Yohawks; Britannia’s version of the Jets and the Sharks, or the Crips and the Bloods if you prefer.

[aside: For most of my life I could have sworn it was “the Mohawks.” It’s only in researching this article that I learned that it was Yohawks, not Mohawks].

In recalling my own youth in Britannia I became curious about just when these gangs had been active and just what they did. We all knew about them, and obviously talked about them now and then, but it had all been in the past sometime.

Truth is the years have dulled my memory and I couldn’t remember anything in particular about them. Like were they Belltown vs Britannia? The Heights vs the Village? Who, and what, and where were they? I had no idea

While they were a very real part of Britannia lore there was absolutely nothing specific about them that I could remember.

In doing the internet research I found a great deal more of exactly the same thing. That is to say, lots of anecdotal memories, references to the Squirrels and Yohawks  “gangs” in a general sense, but nothing specific; just claims of second hand knowledge, etc.

One thing was clear, they were not limited to Britannia or the West end. The Squirrels and Yohawks were everywhere in Ottawa, and nowhere. It was all very vague, having that “a friend of mine had a cousin who once knew someone who …” kind of sense to it.

Missing from all of the accounts and memories was anything you could call an actual fact. You know, events that had dates and locations, people that had names, anything like that. Lots of people have very clear memories of the gangs, except of anything that actually involved the actual gangs, people with names, that sort of thing.1,2,3,4,5.

The fact is it looks like the Squirrels and Yohawks were largely a media creation. Nothing more than labels slapped onto typical youth culture at a given moment, then given excessive media coverage for a very brief period thereby creating the impression of unusual activity, when really there was nothing particularly out of the ordinary going on.

Searching the media archives it looks like it all started with an Ottawa Journal article by Joan Baxter MacLeod in March of 19656. I can find no mention of Yohawks in North American media archives prior to that, at least not in reference to gangs or youth or anything remotely related. An 1883 reference to Yohawk St in Buffalo, NY is the only thing that turns up at all.

The 1965 Journal article is one of these “what kids are doing these days” things, allegedly explaining current youth trends for credulous adults. In it MacLeod describes two “castes”, what should really be called ‘sub-cultures’, the “Squirrels” and the “Beach Bums” or “Yohawks.” 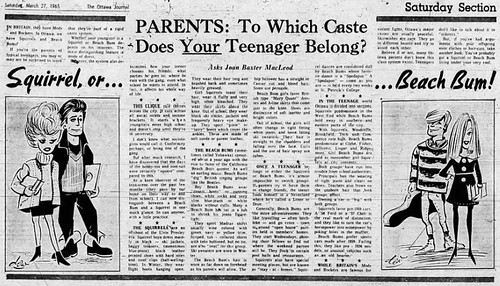 The two groups are defined by their taste in dress, music, etc. The Squirrels are what we would now know as greasers, or Rockers in Europe, favouring leather jackets, hair gel for the males, motorcycles or classic 50s cars, and 50s style rock for music. The Yohawks would be the equivalent of the “Mods”, ie tight jeans, collared shirts, hair touching the collar, scooters and pop rock, ie prep school hipster lite.

In the article Baxter does use the word “gang” twice, but used in the sense of ‘loose collection of people who hang around together.’ She does not ever suggest gangs in the sense of organized or formal groups, just as groups of young people who are together because of similar tastes and preferences.

Then on the evening of Saturday April 3rd there are a few incidents around the city of public drunkenness and fights between young people. There was at least one at Billings Bridge, one in the Market, another in Sandy Hill, and one at Carlingwood; possibly one or two others.

All told 18 people, all from “good families”, were charged with underage drinking and brawling as a consequence of four to six incidents.7

These brawls are all described as confrontations between the Squirrels and the Yohawks, who are now described as “gangs.” Apparently the police had been tipped off that there were going to be conflicts between the two “gangs” that weekend.

This seems to be the only reason these incidents are called “gang fights”, ie the police were expecting gang fights, so it looks like that weekend every Sat night fight got called a “gang fight”. The only details given in the media stories suggest that they were actually nothing more than the usual ‘drunk young males getting in each others face on a Saturday night.’ 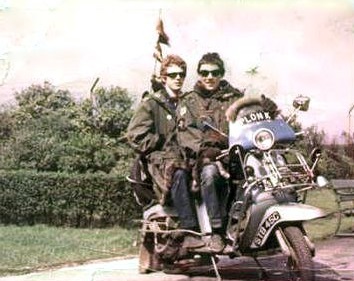 On April 17 a letter was published in the Ottawa Journal from one Tommy Daly, a self-described Yohawk.

In it he states that there are no gangs, just two lifestyles, and that young people identify with one or the other, more or less.

Further that both groups include a few aggressive individuals who like to look for trouble, hence confrontations now and then. The groups include the majority of the 20,000 or so youth in Ottawa at the time, while the aggressive males would number a few dozens, or perhaps a couple of hundred at most. And no “gangs”, just groups of kids.8

Naturally he was ignored. After all, he’s just one of the young people actually living the life that grown ups are all talking and speculating about; what could he possibly know?

Through April and into early May there are several letters to the editor; the usual public hand wringing about what is to be done, etc. In August there are two complaints about the closing down of “Yohawk Haven“, apparently a popular skateboarding (called skurfing at the time) site.

That’s it. That’s the full extent of the gang terror that had Ottawa in it’s grip, and has been remembered for all these decades since. A half dozen scuffles on one Sat night. Other than that one April night there are absolutely no other reported incidents involving either of these two supposed “gangs.”

Further, that one night seems to have been a self-fullfillng prophecy, ie the police were expecting trouble between the two gangs, so everything that happened that night was reported as being a brawl between the Squirrels and the Yohawks.

Sixteen months after the original article Joan Baxter MacLeod publishes a follow up “Wot hoppened [sic] to Squirrels and Yohawks.” In it she repeats her earlier claims about the reality of the “castes”, it’s just that now they have mostly moved on to new youth trends. She says that now they are mostly all “Mods” instead of being Squirrels or Yohawks. The rest of the article describes the new tastes in fashion, music etc. 9 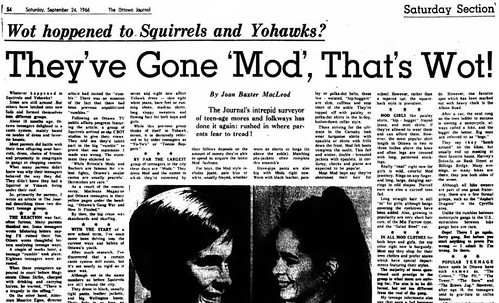 So in the end the entire legend of the Squirrels and Yohawks seems to boil down to one article that labeled and briefly sensationalized some transient youth fashions. That led to one scrappy April Saturday night being portrayed as major brawling between the two non-existent gangs.

That’s it. That’s all there is to it. A media creation in 1965, nothing to see here folks, move along.

Even so, the gangs made it into justice, police and popular lore. An online slide presentation about Somali Youth problems in 2011 describes the Squirrels and Yohawks as the impetus for the creation of the Youth Services Bureau in 1960.10 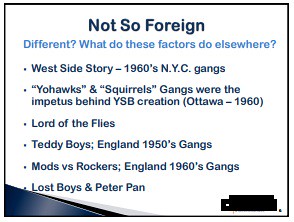 A 2015 article on “The evolution of Ottawa’s gang scene” describes a 2004 police report by then Police Chief Vince Bevan as saying “In the late 1960s and early ’70s, the two prominent gangs were the Squirrels and the Yohawks.”13

Well, they were real in our minds at least. Certainly more real to us than Samuel de Champlain or Sir John A McDonald. They formed a part of the collective psych for those of us growing up around then, maybe longer. They were a very minor factor in our lives, but a real one sensu part of the mythos that explained our experiences to ourselves.

And as noted, the legend has lived on and continues to be treated as received truth, even to this day.

Oh, there is a band called “Yohawks “, and they do have a song about the Squirrels and the Yohawks. That much is real. Click the link to sing along 😉

2 thoughts on “Britannia Myth and Memory; the Squirrels and the Yohawks”