If you happen to search Google Maps for “Britannia Village” you get taken to a place called “Britannia Bay”, which is apparently centered on the intersection of Britannia Road and Cassels St.

Historically just what constituted Britannia, where it was, etc, was not always clear. This is why you get historic references to, for example, Britannia Heights extending as far as Crystal Beach, or even past Bell’s Corners. 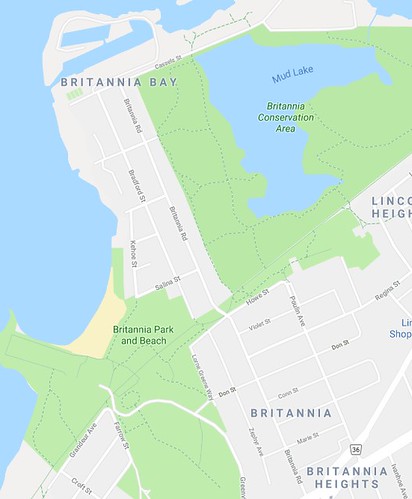 So why is Google trying to revive the name “Britannia Bay”, and why stick it next to  the Deschenes Rapids rather than properly centred on the community itself? It’s not like there isn’t room on the map.

Loma Park aka “Upper Britannia” is labeled as “Britannia, which is pretty common, and the label is at least centered on the neighbourhood as is the norm for Google Maps.

Lincoln Heights is also where it should be.

The label for Britannia Heights is also off centre, sitting squarely on the intersection of Carling Ave and Richmond Rd, presumably pulled north by Britannia Village’s migration towards Quebec, or  maybe Britannia Village is being dragged down stream by flood waters?

As for the body of water known as “Britannia Bay”, well Google sticks that label down at the far end of Belltown, at the western extreme of the actual bay, just as they stuck the community “Britannia Bay” label at the north-eastern extreme, just barely still on the bay.

The communities of Belltown and Britannia Woods do not seem to exist at all, so it’s probably true to say Google holds our whole area in contempt, except perhaps Lincoln Heights.

Further down the rabbit hole … 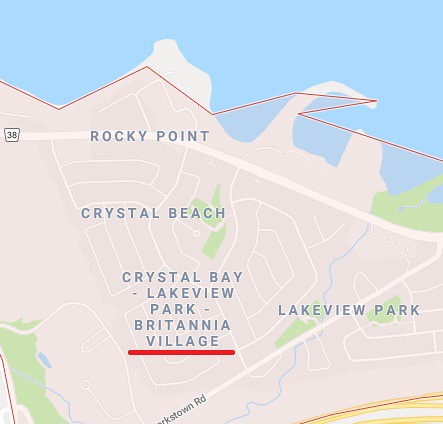 Yup, and if you click on the label it highlights the contiguous communities of Crystal Bay, Lakeview Park, and unconnected, off to the east past Bayshore & Fairfield Heights, is “Britannia Village”. Of course it’s not called “Britannia Village”, it’s labeled  as “Britannia Bay”, or at least the upper left hand corner is. 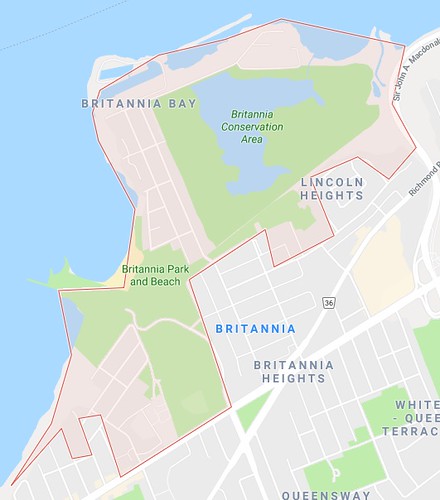 Looking at this alleged community of Britannia Bay we find that someone has gone to some trouble to carefully outline an area that includes not only Britannia Village Britannia Bay whatever that area between the bike path and Cassels is, but also:

As discussed, defining exactly what is and isn’t a community can be difficult, although Britannia is easier than many, as it is mostly bounded by river, forest and major roads. Even so, someone went to some effort to create this google representation, and somehow really messed it up. Seriously, where did this come from, and what were they thinking? How do you even find out?

So, far from being the well defined historic neighbourhood that we thought we knew, it turns out that Britannia Village is a metastisizing nameless anachronism that is part of Crystal Beach and is sneaking off to Quebec. Who knew?