Is there really such a thing as a house design known as “the Britannia Park Home?”

In 1950 Glabar Reality teamed up with a consortium of local contractors and developers to create a hundred homes in Britannia on the former Poulin land that Louis Poulin had tried to develope as Loma Park. By 1951 they had houses on the market. 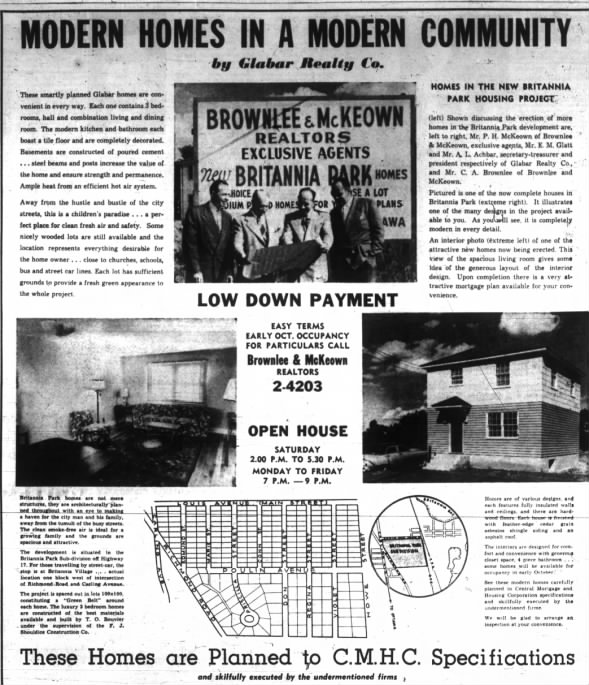 Below we see Loma Park (or ‘Upper Britannia) as it was in 1935, from the train tracks (now Bike Path) at top to Carling (then March Road) at the bottom.

East of Britannia Road (Louis Ave as it was then) there is only Violet, Regina and Don Sts, and even they have only a few scattered cottages. Not much would change in the next ten years. 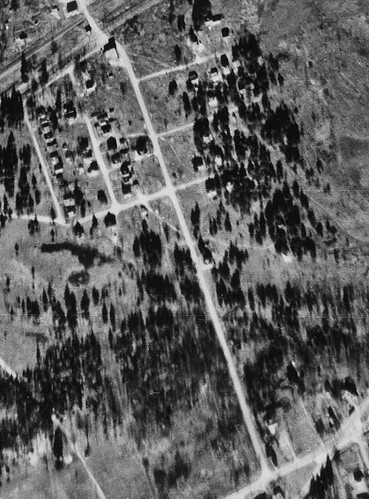 After the war Canada was experiencing a severe housing shortage as well as post-war prosperity; an economic opportunity if ever there was one.

This second wave of Loma Park development would would offer a single model of home; two stories with three bedrooms on a double lot in beautiful Britannia.

In many ways the homes seem like the next step up from the Veteran’s bungalows that sprang up around the city in the mid-to late 1940s; principally around the Experimental Farm, but in many other neighbourhoods as well. Those were built for the returning veterans and their new, and presumably soon to be pregnant bride.

By 1950 many of those families already had 2 children and with another on the way, or at least planned. Those bungalows were getting awfully crowded for some, so it was time to move up to the three bedroom, two story home. 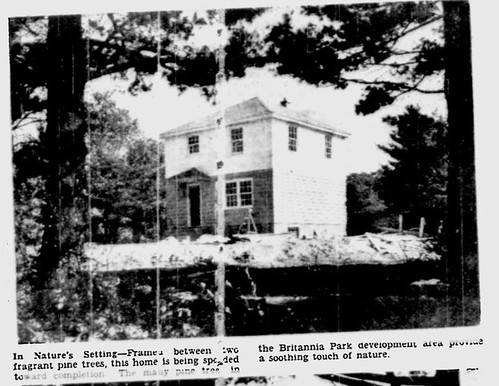 Canada was also experiencing a pretty significant refugee influx from post-war Europe as families whose homes and lives had been shattered were looking for a new life in North America.

The construction of new housing in Britannia as well as relative affordability meant that many would settle down in Britannia. As a result through the 1950s and 1960s Britannia was a broad mix of European immigrants; Poles, French, Hungarians, Brits, Czechs, Germans, Ukranians, what have you. 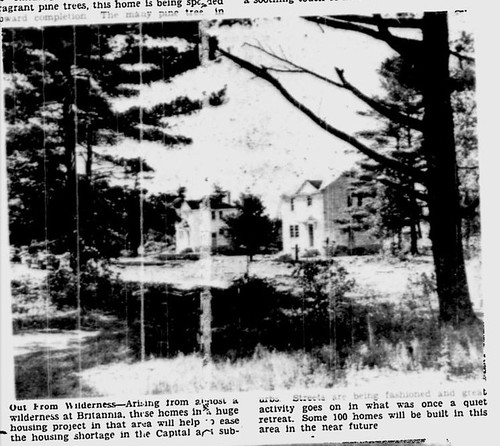 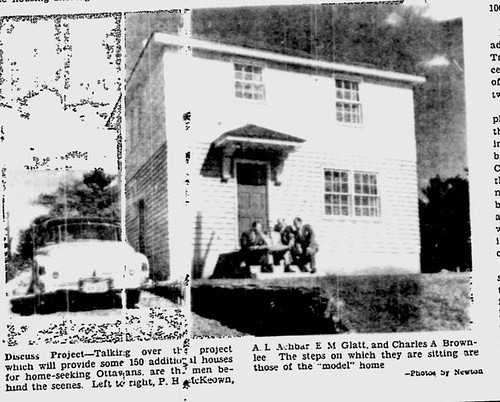 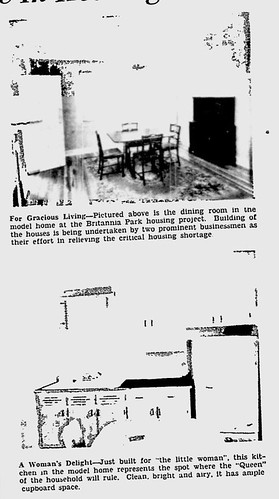 “Just built for “the little woman’” Yeah well, it is 1950 . While small by today’s standards  the ‘Britannia Park Home’ was pretty spacious compared to Veteran bungalows, never mind the cramped apartments downtown. Further, they were priced very reasonably compared to many of the more luxurious homes that were going up elsewhere.

Developers Glatt and Achbar (hence Glabar) weren’t lying when they claimed Britannia had it all. Carlingwood was a short bus ride or 30 mn walk. There were schools, public transit, and all the amenities, while still essentially living in the country, far from noise, crime and pollution. 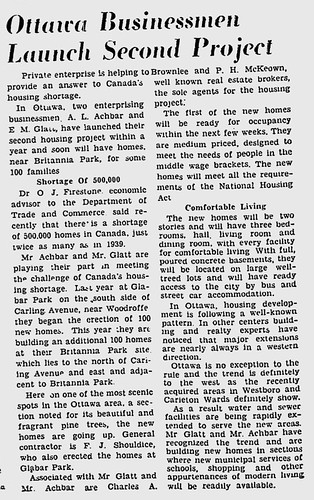 In promoting sales Glabar Reality produced a “picture pamphlet” (and wouldn’t it be great to find a copy of one of those) for the “Britannia Park Home.” Is that really the name of this particular design, or was it just what they were saying to flog these particular ones? 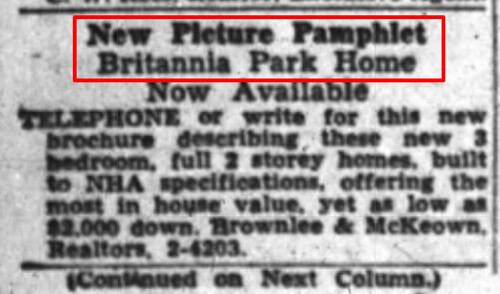 An internet search for the term gets nothing other than the Glabar ads from 1951 and 1952. At the same time I don’t know that this particular design is found anywhere other than Britannia.

Given the odd consortium of contractors that built these homes (below) it may well have been a rather unique project. Further, the design was all very modern for 1950, but post-war North America was changing fast and there was more money to be made in building somewhat larger, more luxurious houses to match the post-war prosperity that many were enjoying.

So was this house design a unique one off of mass development, and hence truly the “Britannia Park Home?”

I don’t know, but it’s possible. They are certainly a recognizable feature throughout Loma Park. I don’t know if Glabar actually built 100 of them, but there are quite a few in our neighbourhood, and I’ve never really noticed the same design anywhere else.

Until someone shows us different I suggest we recognize this design is our 15 minutes of fame in the world, “the Britannia Park Home.”

The paragraph below no longer applies as Margins of History has corrected his post. Text is left for anyone working with the previous understanding of the geography and history. Also the article  Robert Magee’s Farm and (Lincoln) Field(s) of Dreams  is still great and still worth reading, so this is an excuse to say that again 😉

NB I love the Margins of History blog, but they got kind of confused about this development. In the wonderful article Robert Magee’s Farm and (Lincoln) Field(s) of Dreams it says “Glabar Realty (which began to develop the Britannia Heights subdivision in 1951, mostly on former Booth land).”
OK, the Glabar development was in Loma Park, NOT Britannia Heights, which is south of Richmond & Carling. Loma Park was J.R. Booth land before it was Poulin land, but it’s a little odd to mention Booth rather than Poulin, except perhaps because that it how it appears in the 1879 Carleton County Map.

However, the one error creates another, viz Britannia Heights was developed on the former N.G. Robinson land, not Booth.