Britannia Pier was built in 1900 as part of the Britannia Park and the Electric Railway, an amusement theme  park mega-project of the Ottawa Electric Railway Co. The original pier was 1000 ft long and built (below) using rubble from the dredging of the Metropolitan Electric Power Canal project at Deschenes Rapids.1.

The trouble is, that means it’s not a pier.

Not surprisingly there are different terms for all of the different kinds of construction involved in shipping, boating, harbours, docks and what have you. A structure extending perpendicular from the shore and built on fill (earth, stone, other) is a jetty, not a pier.

What they built in Britannia in 1900 is clearly a jetty. 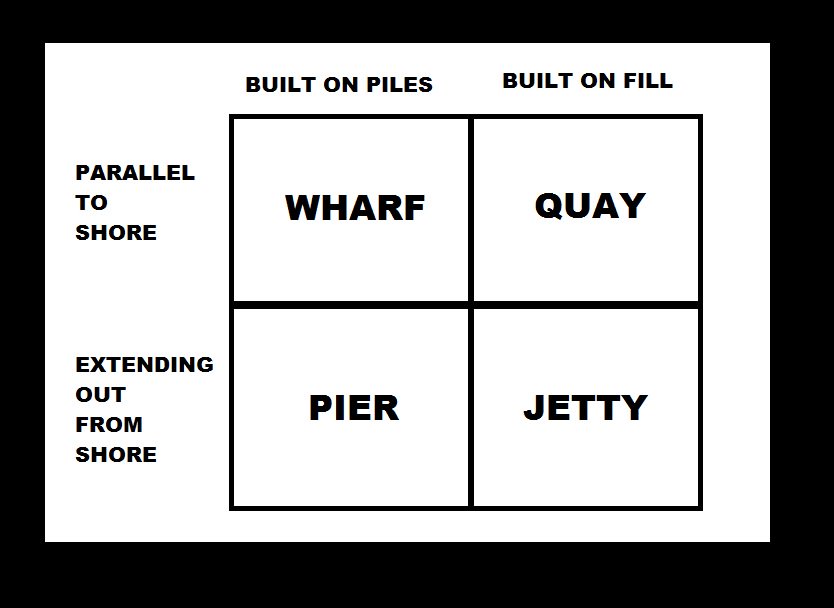 The original structure also included a section at the end built parallel to the shore, but also built on fill (below). As such the whole structure was a jetty with a quay on the end.

Another curiosity is the photo above, often labeled “c. 1899.” Since the contract for the pier was only awarded in Jan 1990 the photo has to be from the summer of 1900.

In 1902 the Boat House Club (later Britannia Yacht Club) approached the Ottawa Electric Railway with a view to have a boathouse at the end of the pier and permission to hire out boats2. The proposal was eventually accepted and work began in 1905, finishing in 1906 1

The significance of this addition was two fold. For one thing the clubhouse was built  at the end of an extension that was built on piles, ie Britannia finally had an actual pier. 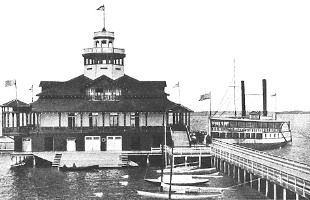 The second significant thing was that this extension went far enough to reach deeper water such that the steamships could dock at Britannia (see above), but more on that elsewhere.

In 1907 the Ottawa Electric Railway Co. announced the plan to build a 150 foot extension on the end of the pier to extend east, not out ie parallel to the shore, rather than further out into the lake3. This would act as a protective barrier to create a harbour somewhat protected from the lake.

This extension would also sit on piles and hence it would actually be a wharf. So in the end what we had was really a jetty with a quay and a pier and a wharf; so fair to say that Britannia “had it all!”

The Pier was an important part of the Britannia Park attraction, offering swimming, a diving tower, sailing, boating, fishing, steamship excursions to Queen’s Park (Aylmer) and Chat’s Falls, nightly “hops” (dances) at the Clubhouse, not to mention romantic strolls along the pier.

Another important amenity was a pumping station at the end of the pier which was operated by the Ahearn family and supplied fresh water to the cottages in the area4.

Unfortunately the wooden structures were vulnerable to storm and ice damage. Already in 1907 there was considerable ice damage to the pier and Clubhouse. The blog lindaseccaspina remembers the invention of the wheel has a good article on this that is worth checking out, “Britannia Boat House Doomed— April 1907 Ice Jam.” 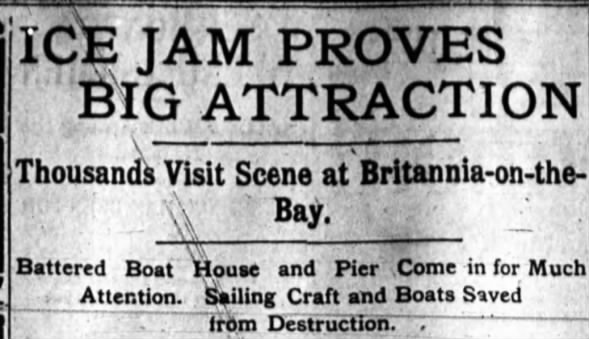 More extensive coverage at the time:

In 1908 the Clubhouse was partially wrecked by a storm, and then in 1916 a gale with 30 mph winds destroyed changing houses and did considerable damage to both the pier and the Clubhouse5. 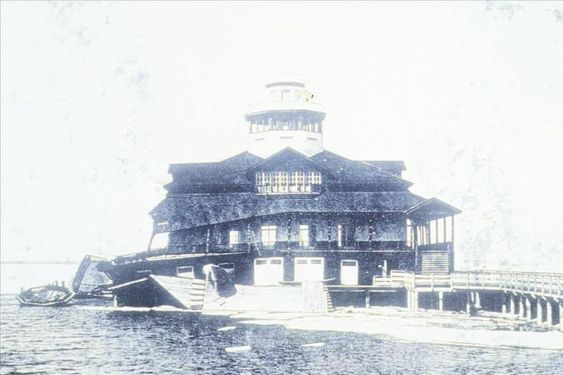 Presumably all of this was quite trying for the Clubhouse Caretaker, one W. John Chapman, who according to the 1914 City Directory was a resident in the Clubhouse. Something of a local hero he is credited with five separate drowning rescues in 1914 alone6.

All of the rough weather is also a problem for the regattas, and in July 1914 a proposal was made to build a breakwater from Rocky Point (separating Crystal and Graham’s Bays) to Britannia Pier, thereby enclosing both Graham’s and Britannia Bay as a protected boating area7.

Nothing came of this, presumably as August 1914 brought other concerns to the forefront of peoples minds.

The Pier’s troubles were far from over. On August 29th, 1918 starting at about 4:45 PM a fire completely destroyed the Clubhouse, a 100 ft section of the pier, about 200 canoes, two motorboats and “Gramaphones”, in about 45 minutes8. 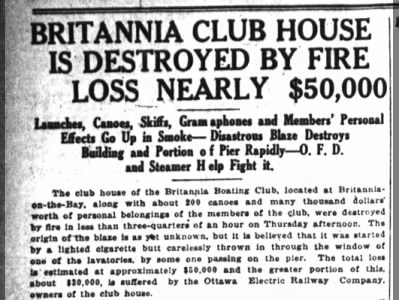 The losses would have been even greater but for two factors. First, the new Caretaker William Dompierre*, assisted by some members of the Clubhouse, managed to cut many of the smaller craft loose such that they floated safely away to be recovered later. 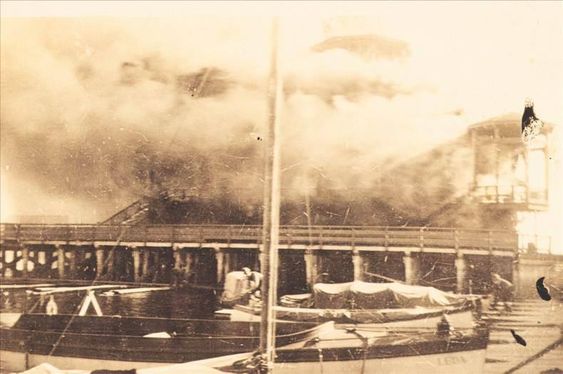 Second, the Steamer G.B. Greene was not far off and came to aid in fighting the fire, arriving in 15 minutes, which was about the same time as the Fire Dept. The blaze was so intense the clubhouse was already lost, but together they prevented the fire from destroying the rest of the pier, the changing rooms, fuel shed, and the sail boats.

Regardless, the Clubhouse was destroyed and the Ottawa Electric Railway Co. decided not to replace it. The pier and park would continue to be popular attractions, but the Boat House Club would move back to what is now the Britannia Yacht Club, and sailing, rowing and boating would become more dispersed to clubs all around the city9. 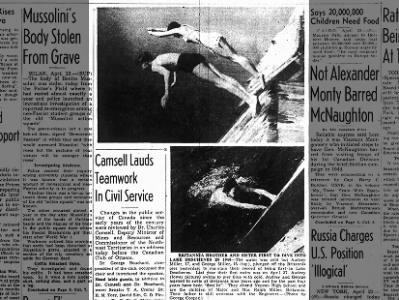 And so it would remain for the next 36 years. Other than occasional minor reports of lost articles, excursions, first swim in the spring, drownings, fireworks and other events, the Pier largely disappeared from the news.

Then in  the spring of 1954 a devastating report in the Ottawa Journal. The Park in general, and the pier in particular, are in various states of decay, so much so as to be a significant safety hazard. It is recommended that the Park be closed for the season10. 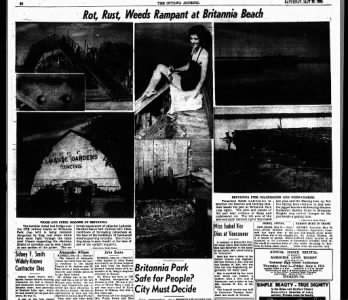 The list of problems is extensive, some of the worst being that the metal footbridge over the train tracks are severely rusted,  nearing collapse, and the supports for the base of the Lakeside Gardens Auditorium are badly rotted.

The worst is the pier.  The entire west end of the wharf had been closed the previous year due to extensive rot and collapse. All along the pier there was underwater rot, disintegrating planks and large holes in the siding.

The real scandal is that all of this had been noted and documented two years earlier and nothing done about it. In March 1954 the City dissolved the Britannia Park sub-committee and took over direct control. They then appropriated $25,000 for emergency repairs to keep the Park open and began discussions about what to do next11.

The discussion is divisive. On the one hand some note that the Park draws up to 10,000 people on a typical Sunday and has the potential to be the “new Coney Island11. On the other hand a cash strapped City is not interested in pouring hundreds of thousands of dollars into an amusement park.

In 1955 the the Pier’s opening is delayed12, although emergency repairs allow it to be repaired before the end of June13. In Nov 1956 the City releases it’s new plans for the Park.

The plan is to revitalize the aging park, but is a much more modest vision than “the new Coney Island.” The wooden pier and wharf are to be demolished, the original jetty and quay are to be widened with more fill on the north-east side to stabilize them, to act as a breakwater, and effectively create beach areas all around the pier14.

The project does not go smoothly as a steam shovel crashes through the ice in March 195715, and then the equipment is flooded out by high water in July16.

For the next 20 yrs the beach is plagued by pollution as the wider breakwater effectively stops current flow and water mixing. To the west of the pier the water becomes increasingly shallow from sediment settling, while to the east it is more stagnant.

The much more spacious “pier” is popular for paid events such as the Ottawa Folk Festival which was held there for some years. The location meant it was relatively easy to cordon off and restrict access, and loud music could be sent out over the lake and hence disturb fewer people than at other venues.

At some point between 1980 and 1991 more fill is added to the end of the pier, including three long extensions of stone. These jetties meant that once more the pier reached the deeper water of Lac Deschenes, although of course the deep draw steam ships are long gone.

During the 1990s ‘Britannia Queer’ was a well known cruising zone for Ottawa’s gay community. This died out in the early 2000s as broader acceptance meant gays could meet in more public places, and the internet provided much more convenient ways to meet like minded people.

In 2000 then Councillor Ron Kolbus was championing a notion to recreate something resembling the original pier along the top of the stone jetty. This was to include a wooden boardwalk with a large gazebo at the end17. The idea seems to have died with Councillor Kolbus in 2001.

The pier remains a popular spot for birding, photography, fishing, swimming, picnics, events (like the Great Canadian Chill), and just casual strolls to take some air and enjoy the lake.

Many more historical photos of the pier at Pinterest 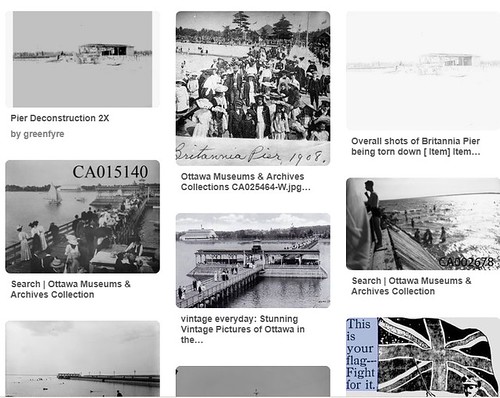 *Actually a newspaper article from Aug 1914 already identifies a “William Dampier” as the Caretaker, a bare month after Chapman is lauded as a local hero. Even stranger, the 1915 City Directory still lists Chapman as the Caretaker. The 1916 City Directory has no mention of Chapman in Britannia, and lists a William H Dompierre as profession “caretaker”, albeit residing on the North side of Main St (ie Britannia Rd)