“Britannia at War” is a bit of a stretch as the links are pretty tenuous.

There was of course the showing of propaganda films and newsreels at the Britannia Park Auditorium (Lakeside Gardens). No doubt these would have been a great draw, combining as they did both the novelty of film and news of the Front. In July 1917 some audience members actually saw pictures of their two sons in a film there.

However, one overt link is this recruiting poster for the 207th Battalion where we learn that you can sign up to join the fight right there on Britannia Pier, otherwise:

“… could you bear to hear it said,

that you crawled under the bed,

while the rest of us were standing up to fire.“ 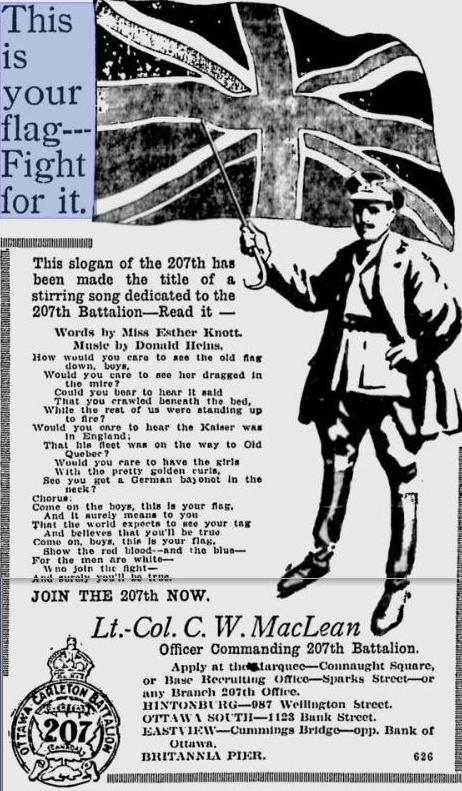 The real target of the Britannia Pier Office would not have been the local lads who farmed and worked the mills so much as all the young men coming to Britannia Park on evenings and weekends.

Think about it. Imagine a lad of 19 or so, out to impress some young lady, or perhaps just manning about the beach with his usual gang of pals, and coming upon this poster and the recruiting Officer.

Well Me Lad, what will impress the lass now? what will show your mates what a man you are? and what will you do if one or two of your mates step forward to sign up?

Downtown it is easy enough to never go near the recruiting offices, but here you are now, right in front of everybody, everybody is watching you. “Can you bear to hear it said?”

As an aside I will note the overtly racist, but apparently then socially acceptable, refrain:

“For the men are white

who join the fight —

and surely you’ll be true.“

Of course some local lads undoubtedly joined up, and the Battalion Roll for 1917 lists two men who were probably Britannia locals.

For next of kin Private Frederick Allen Beatty who signed up on Feb 19th, 1916 lists Harry M. Beatty of R.R. 1, Britannia Bay. Lance Corporal  Frederick Rainsford Harvey, born in Australia, signed up May 13, 1916 and lists Mrs Elizabeth Harvey of Britannia, Ont as his next of kin.

According to the 1916 Directory Mrs Elizabeth Harvey was a widow who lived on the south side of Cassels. There is no listing for a Mr Beatty, and this designation of R.R. 1 seems to have been a postal designation routing mail through the Britannia Heights Post Office rather than actually in Britannia itself. 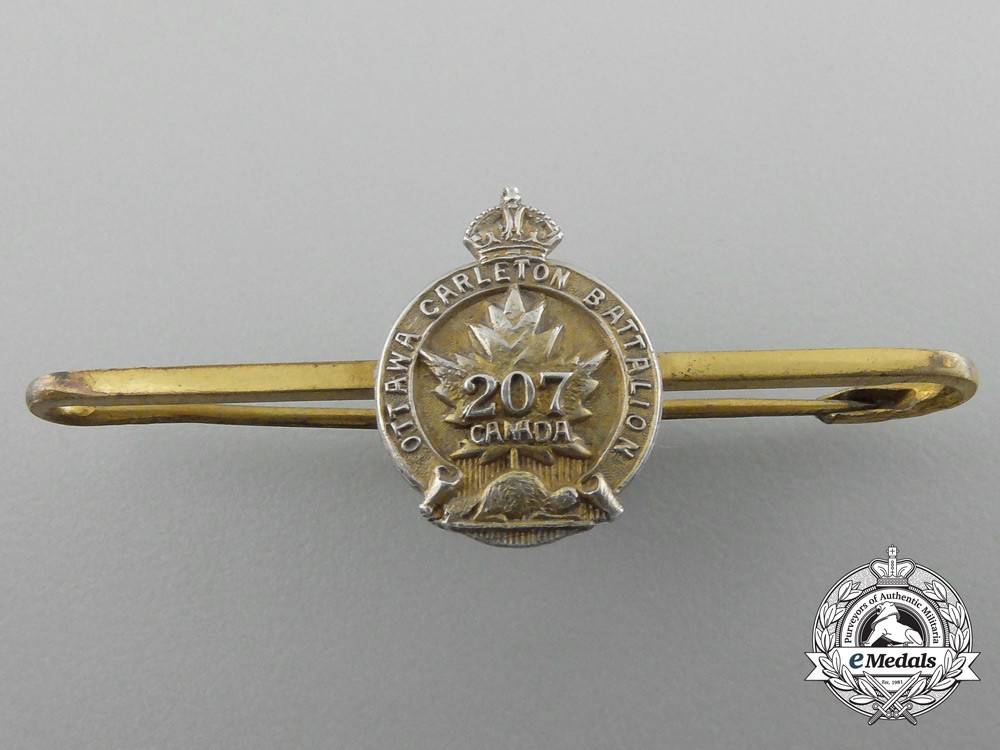 Rainsford was not only a local resident, but also a member of the Ottawa Rowing Club and a member of the winning boat in the 1916 Britannia Patriotic Regatta. Thus Rainsford would have been just one more of the many athletes that caused the 207th to be known as “MacLean’s Athletes.”

I am going to speculate (because I can’t document it) that this regatta may have been held at the Britannia Boating Club (now Britannia Yacht Club), and hence another Britannia link, rather than simply a Regatta named for Mother England. The only other reference to the Regatta I can find is mention of a donation for prisoners of war by the  Britannia Patriotic Regatta Committee.

The decision to call up the 207th as a new Battalion had been announced on Feb 8, 1916. The news may not have been as electrifying as first hoped as the announcement came alongside the first pictures of the smoking ruins of the Parliament Buildings which had just burned down;

A bit of a distraction really.

Bringing the Battalion up to strength proved difficult as by 1916 the War had already sucked up a lot of the local men of fighting age. This forced Colonel MacLean to adopt some novel tactics, including buying four motor cars so officers could to travel to remoter locales, a recruiting office (Kiosk?) at/on Britannia Pier, and wilder ideas which were not even tried.

Recruiting would continue, but finally it was thought that there were sufficient men to begin, and so on June 26 the 207th marched off to Rockcliffe Camp for battalion-level training. There they would remain until they could be brought up to full strength, which would take another seven months as it turned out. In the end 1,400 men were recruited, of whom 800 were accepted as fit to serve.

The 207th finally left Ottawa about Jan 20th, 1917; rather a long wait for those who had signed up almost a year earlier.

They arrived in Amherst NS in early Feb in preparation to board ship and depart for Europe.  Immediate departure was so imminent that they did not even bring their rifles;

and then they waited,

Just when departure seemed assured scarlet fever broke out in the unit and on Mar 1st the entire battalion was quarantined. Two weeks later a mumps epidemic swept through the ranks, then measles and black diptheria a week after that; the Front must have started to look safer than Nova Scotia, or at least healthier.

To pass the time the lads got drunk as often as seemed needful, and were chagrined to discover that many of the local bootleggers would not sell liqour on a Sunday.  At $2/bottle the local “condensed lightening” apparently satisfied their refined Ottawa Valley tastes for distraction, as quarantine meant the men could not even attend Church on Sundays.

April came, sickness was still epidemic, and local health resources were stretched to the limit. In late April the Battalion was fumigated amid rumours that it would be disbanded and sent overseas piecemeal.

Finally they Left for Halifax on May 28th, set sail on June 2nd, and on June 11th it was revealed that the 207th had arrived safely in England.

At which point the Battalion was immediately broken up and used to fill out the ranks of other units needing replacements, such as the 2nd Battalion, The Princess Patricia’s Light Inf, and so on.

In Sept 1919 the Colours were brought home and on Nov 16, 1919 they were laid up at the Knox Presbyterian Church on Lisgar.

Apparently a copy of the Photographic record of the 207th Ottawa-Carleton Battalion, C.E.F.  may be part of the holdings of Library and Archives Canada; if so it would be great to get them online.

The images above are from an eBay auction of the book, if anyone has $300 they’d care to part with.

I began by saying that Britannia had only a tenuous connection to WWI, but that was misleading. That war almost wiped out a whole generation of young men, and damaged many of those who survived it. The societies of all of the countries that were involved in it were profoundly affected. From 1914 to 1918 “the War” was always a part of everyday life in some way for most people in the affected nations.

But it didn’t end in 1918. How could it? Almost every home was affected to some extent. A lost son, a father prone to alcoholism and sudden rages, the cousin who cried almost every night in his sleep, the blind neighbour down the road, the store clerk with only one leg, the school teacher who one day just hung himself ‘for no reason’.

Most didn’t talk about it, they just carried on as best they could. If you weren’t there you wouldn’t understand. If you were there, then there was nothing that needed to be said. So just carry on; chin up, soldier on.

And so in turn the women and children also became victims as they were caught up in the lives of the Veterans, the lost loves, the empty chairs and silences.

Like every other community Britannia would have been deeply and profoundly connected to the war for many years, both during and after. I know of no way to determine just how many men from Britannia got caught up in the meat grinder that was WWI and survived, possibly damaged or broken.

As far as I can determine to date there were only three who was Killed in Action. In that regard at least, Britannia was lucky.

Commemorated on Page 423 of the First World War Book of Remembrance.

Spouse of Bridget Clarke, father of Roderick, Margaret, Stewart and Richard of 35a Henderson and 142 Britannia Rd.

Commemorated on Page 217 of the First World War Book of Remembrance.

Son of William and Ellen Maloney, of Violet St, Britannia.

Commemorated on Page 289 of the First World War Book of Remembrance .

See also: Britannia at War: Sons of Britannia in the Great War