The Britannia Drive-In Theatre opened on Fri 16 Jul 1948, with a showing of the Marx Brothers “A Night in Casablanca.” Opening night was apparently mayhem as a capacity crowd of 1000 cars backed traffic in every direction and seven police officers were needed to sort it out. 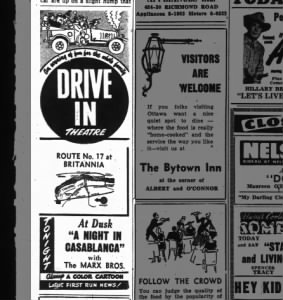 As this was Ottawa’s first Drive-In theatre  (The Auto-Sky would open two weeks later), The Ottawa Journal article gives detailed instructions on how this new-fangled idea actually worked, and what you did when you got there.

This one reference states that in the 1940s Drive-In Theatres were found only in Canada, but that does not seem to be true.

For 1948 this site lists 13 Drive-Ins in the state of Alabama alone, never mind the rest of the USA.

Now that Drive-In Theatres are an anachronism those instructions may prove interesting to those who have never been to a Drive-In because they are too young. The article also includes various human interest tidbits, such as the man who brought an aunt who had never seen a “talkie.” 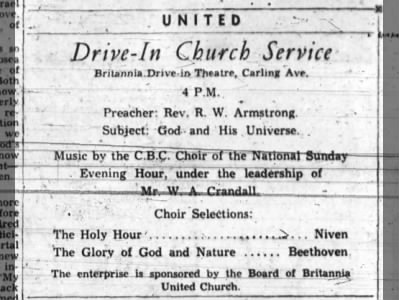 Church conducted Drive-In Services on Sundays at the Britannia Drive-In.

Apparently they loaded up the organ and choir and headed out every Sunday, and the choir stood and sang in whatever the weather was. Given that, I am surprised the idea lasted as long as it did.

This segment of the Eye Witness, a 1950 National Film Board French newsreel, has some great footage of the practice. Just skip to the 3:37 min/sec and enjoy.

However, that wasn’t a first for Ottawa or Canada.

For Victoria Day 1951 there was a fireworks display to go along with  Abbot and Costellos Wistful Widow of Wagon Gap. Not one of their more memorable efforts, so perhaps the fireworks were a good idea.

At 3090 Carling Avenue the Britannia Drive-In was not, strictly speaking, in Britannia. However, both the name and role it played in the lives of Britannians means it was very much a part of Britannia life for almost 50 yrs.

Who knows how many Britannians not only saw movies, but had their first experiences of romance, sex, alcohol, etc, there, not to mention the hundreds who were employed there as ushers and canteen staff over the decades.

It was also often used as a gathering place for birders and hikers before heading out to their eventual destination, as well as a landmark for directions. 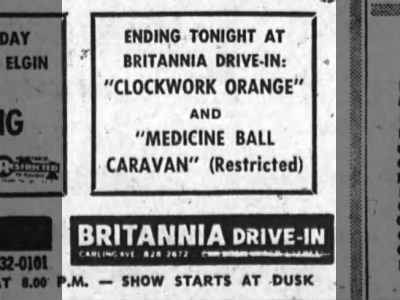 Over the years the Britannia Drive-In brought many classics to west end theatre goers: Ben Hur, The Exorcist, Enter the Dragon, Spartacus, the entire Fistful of Dollars series, and many more.

There were also a LOT of ‘not so classic’ movies.

And let’s not even get started on the canteen fare.

Of course there were other excitements, such as the 1955 break in when thieves broke into and stole the contents of the safe. The report takes some delight in noting that at the time the theatre was showing Dean Martin and Jerry Lewis in Money from Home.

Or the time in 1957 when an usher, who was climbing the screen for some unknown reason at 11:30 PM, with patrons still in the theatre, fell 90 ft in full view of everyone. He was seriously, but apparently not permanently, injured.

I have found a couple of sources on the internet which claim the Drive-In was “twinned” (ie a second screen added) in the 1960s, but those are wrong. I worked there for about 18 months in 1974/1975 and there was one, and only one, screen at the time. 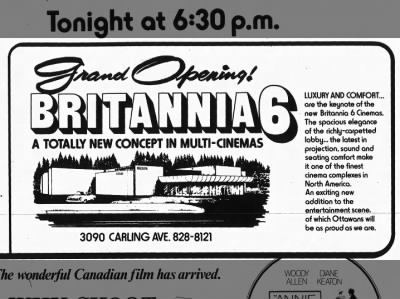 It is not until late Sept of 1976 that ads mention “Britannia 1”, and then on Oct 9th, 1976 they advertise “Twin Drive-Ins” for the first time. Then 9 months later in June, 1977 they opened the Britannia 6 indoor complex. 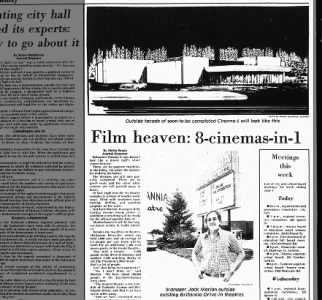 The Drive Ins and the Britannia 6 closed  in 1997, just one year short of 50 yrs for the Drive-In. They were demolished and replaced by a sprawling mini-mall and the Coliseum 12 Theatre. 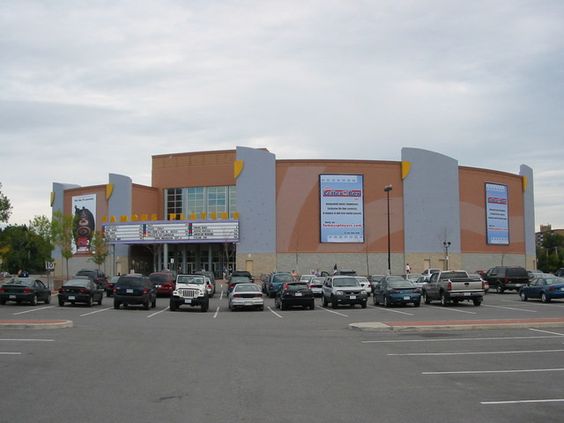 “Built on the old Britannia Drive-In site, the Coliseum 12 was opened by Famous Players on July 12, 1998 with the movie “Amageddon” playing in seven screens, one of them in French. It was renamed Cineplex Cinemas Ottawa in March 2014.  Contributed by Harry Hopkinson”

2 thoughts on “The Britannia Drive-In Theatre”