Apparently nothing came of this, so the CPR train and street cars continued to be the only public transit to Britannia.

The O’Brien brothers propose a Britannia – Ottawa bus service with six buses and three routes, all to begin at the intersection of Richmond and Carling and end downtown.

One route would go straight down Richmond much like the current #11, a second would more or less follow the current #85, but ending downtown Ottawa, and a third would go rather more south along Merivale before going downtown. 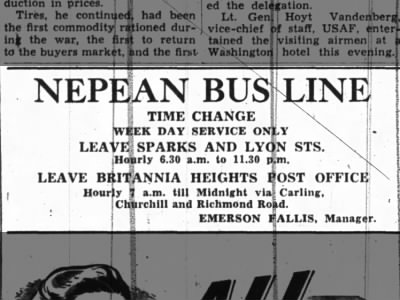 With the Street Cars gone the 61 Carling and 51 Britannia (replacing the old Route 4) buses were how you got anywhere after 1959. It would cost you 15 Cents and there would be a number 51 every 20 minutes.

Below is the complete Transit Guide for 1959 (really), just click to open the link.

Route #51 to Britannia is discontinued. The #52 route is extended from Carlingwood along Carling to Croydon, then to Richmond, etc ie what would eventually become the #16.

The City calls for tenders to construct 5 rapid transit stations, including one on the River Parkway where it intersects Carling Ave, to be called “Lincoln Fields Station.”

The Station was to be finished in the summer of 1984, but would not actually be finished until  the end of the  year.

With the opening of the Light Rail Transit the #16 route is divided into two and the western portion is renamed as the old #51, although the actual route is quite different from the original.

Then in late fall the crab apple orchard is leveled in preparation for LRT phase II.