Britannia’s first Post Master was Walter Harmer who opened a Post Office and General Store at 48 Britannia Road in 1875. Economic stagnation forced it’s closure in 1880 and Harmer left the village.

A new Post Office was opened at the Hand Grocers at the corner of Britannia Road and Rowatt (Main Street and Sparks St at the time) in 1889 with Catherine Hand as the Post Master [sic], but she died in Oct of 1890 and the Post Office closed.

As Eva Taylor explains in her book, local politics meant the next incarnation was the Mosgrove Post Office which opened in the Old Forge to serve Britannia Heights. Robert Winthrop was the Post Master there until 1906. See Taylor’s book for the salacious details.

Back in the village Barbara McAmmond opened a Post Office and General Store in 1891 where Main Street (now Britannia Road) crossed the railway tracks (now the NCC bike path)1.

The site later became Smileys Bros Grocery at 244 Britannia Road, but the Post Office function moved out at some point before this.

At this time Brebner’s Manufacturing occupies the front of the building. 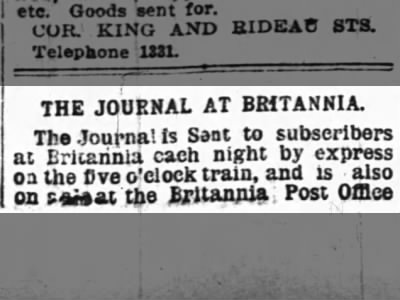 It was here that one could purchase the latest Ottawa Journal if you were not a subscriber, in which case it was probably still picked up at the Post Office , but with your mail.

As we see in the Sessional Papers of the Dominion of Canada (below), the Britannia Bay Post Office was still active in 1911 with A.  (Albert) MacKay as the contractor. One would assume that this means the Postmaster, but the Ottawa City Directory, Might, 1911 does not identify him as such even though he is listed as living in Britannia. The 1912 Directory does list him as Postmaster

It is worth noting that he received $50/yr for the service, whereas nine yrs earlier Barbara McAmmond got only $15, and when she started it was a mere $5/year . No doubt this reflects the sexism of the day as Britannia had not grown that much, nor was inflation that extreme at the time.2

Sessional Papers of the Dominion of Canada

In 1918 there was some excitement at the Post Office for Post Master and shop keeper W.H. Sully. 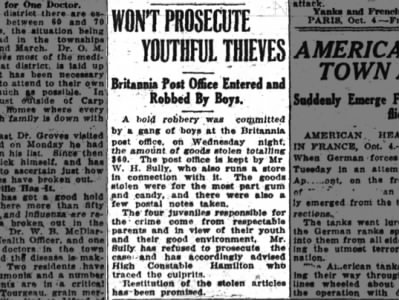 Which is rather odd since the  Ottawa directories 1913 to 1916 all  list W. F. Nesbitt as Post Master and grocer, as does the 1923 Directory and the 1921 Sessional Papers list him as the Postmaster as well. So who is W.H. Sully and how does he fit in?

The 1916 Directory lists a Wilbert H. Sully of Zephyr Ave as a clerk, so perhaps he was an employee of Nesbitt’s? The 1923 Directory lists Margaret L. Sully, widow of Wilbert H., as living on Zephyr, so clearly Wilbert died shortly after the 1918 incident.

The more recently available Ottawa Citizen archives tell us that Wilbert Hugh Horace Sully was also an election enumerator, member of the Order of Odd Fellows (Lodge 224), streetcar conductor, and that he died Dec 12th, 1921 at age 35. In addition to his widow he had a son, Norman.

In 1936 Margaret L. Sully is still a resident of Britannia. She died at age 86 in in 1970. By then she was living on Wellington at Parkdale in Hintonburg.

Eva Taylor1 says Nesbitt left the business in 1917 and returned in 1920, during which time Sully was the proprietor and Postmaster. The Nesbitt’s continue to reside in Britannia until at least 1941. According to Vern Fraser  on the Britannia Facebook group the Nesbitts resided in the the brick house immediately adjacent to the store, ie 240 Britannia Rd.

According to Eva Taylor1 a John Farrel took over the store at the corner of Howe and Britannia Rd in 1927, and became Postmaster when Nesbitt resigned, but she does not state when that was. So it would seem that for a while at least the Post  Office was at 2728 Dufferin (later Howe).

In the Britannia Facebook Group Martin LaHaise says that the Britannia Post Office was active through the 1950s. According to LaHaise it operated out of the right side of 238 Britannia Road (above) with Mrs McClintock (spelling?) as the Post Mistress. Beverly Brown in a different post suggests that was the post office from the late 1940s.

In 1959 the City approved home delivery to the west end and the Britannia Heights and Britannia Bay Stations became sub-stations and the rural routes transferred to Bells Corners.

Some time after that the Britannia Bay Post Office closed for good. For years thereafter I believe that the nearest Post Office was at Carlingwood. More recently there is a Postal Outlet at the Quickie at the corner of Richmond Road and Croydon Ave.

Meanwhile the old Mosgrove Post office had moved and changed it’s name. According to Vern Fraser of the Britannia Facebook Group the Britannia Heights Post Office

“ … was located in the MacLaurin [spelling corrected] store at Carling and Pinecrest. It moved into the lower floor of a building built on the same property by the family in the mid 50’s. the family lived in apartment on the second floor. That facility had locked boxes but gave 24/7 access to one’s mail. I remember our box number was 33! The property is now a Minto Highrise.“

The Ottawa City Directory, Might, 1913 lists a George Lark as Postmaster and grocer on John St (later Pinecrest Rd), presumably the same location as described by Vern Fraser, as do the subsequent Directories to 1916. Strangely the same directory only lists the Britannia Bay post office, with no listing for Britannia Heights. Lark and the Britannia Heights Post Office to appear in the 1914 Directory though.

The 1914 Directory also lists a “Britannia Bay Rural Route No. 1, leaves 9:15 AM”, so clearly some level of more local delivery had begun, although to where is not known.

The 1959 article below cites Cameron R. MacLaurin as having been the Post Master for 33 years, which would be since 1927. However, the Ottawa City Directory, Might, 1923 lists both he and George Lark as Post Masters for Britannia Heights, so perhaps there was a business partnership?. In 1941 the location served as Post Office, General Store, and a bus terminus for the Nepean Bus Line.

According to Eva Taylor, in 1912 George Lark Jr (formerly of Britannia Rd) was asked to take over the Post Office for Britannia Heights (formerly Mosgrove) as the Winthrops were giving it up and the Lark’s general store was a logical location. George and  his sister Mary did so and kept it until they sold the business  to Cameron  MacLaurin in 1923 1.

A 1932 obituary for George Lark states that even though he sold the business in 1923, he retained the title of Postmaster, which would explain the double entry for the 1923 Directory, as well as confusion as to quite when MacLaurin became Postmaster.

In 1959 the decision was taken to extend home delivery to Britannia, although it was not implemented until Mar , 1960. The MacLaurin store closed1 and Britannia Heights Post Office  was converted to a letter carrier terminal. This eventually closed, probably when the Carlingwood Post Office became the central facility for the region. 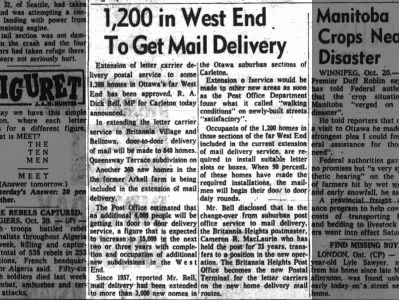 2 These early years are difficult to verify as the two primary sources do not cite their sources, and what should be supporting documents don’t help.  For Harmer House the main source is a magazine article  that interviews Michel Prévost, Chief Archivist at the University of Ottawa. I have no doubt Prévost was certain of his information, but where did it come from?