When Britannia was annexed by the City of Ottawa in 1950 many of Britannia’s existing street names were changed because Ottawa already had streets with those particular names. In a few cases streets disappeared or their names changed for other reasons. Old street names that have been replaced can be found here. 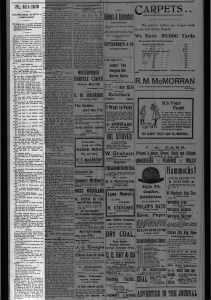 Prior to administration by some sort of municipal or regional body, locations tend not to have a fixed numerical street address. Instead they are usually given a name based on something unique or distinctive about the location, be it a geographic feature, or the name of the owner, or a long term resident, whether a person or a business.

Generally this system is workable, but it becomes problematic with places that have a transient population such as rental cottages and camping sites. As such they would be given a name, perhaps something that reflected the location, or just something that appealed to the owner. As well, even though many of the cottages in Britannia were used by the same family annually they were often given descriptive names rather than simply being known as ‘So and sos‘ as a permanent residence might.

*(had many simultaneous residents, so it may have been a boarding house, cabins or some such),

As such, while we can find sources that say this or that person lived at Buena Vista Cottage or Night Owl Camp, there is a fair chance that we have no idea where these places actually were in Britannia.